Many teens suffer from depression which can lead to difficulties later on in life. A common treatment for depression is online cognitive behavioral therapy. Yet, it does not help everyone and more available options are needed. A new psychodynamic therapy via the internet is a non-inferior alternative to the proven internet-based CBT for teenage depression. This is concluded in a study published in the scientific journal Lancet Digital Health conducted by a large international research team consisting of, among others, Jakob Mechler, Karin Lindqvist and Björn Philips at the Department of Psychology.

The researchers have compared internet-based psychodynamic therapy (IPDT) with internet-based cognitive behavioral therapy (ICBT) as treatment method for teenage depression. The study was funded by the Kavli Foundation and carried out in collaboration with Linköping University, which produced the platform as well as the ICBT used in the study. The study is the first major one comparing ICBT with IPDT. The study was included in the research project ERiCA (www.erica.nu), within which the very first internet-based psychodynamic treatment for young people with depression was developed.

The difference between CBT and PDT:
CBT and PDT are two different schools in psychology where the method of treatment also differs.

CBT – Cognitive behavioral therapy – assumes that it is possible to influence and change thoughts, behavior and emotions. The therapy encourages you to change your thought processes and identify behaviors that contribute to the depression in order to increase the actions that contribute to well-being.

PDT – Psychodynamic therapy – emphasizes the importance of the background of mental symptoms in unconscious emotions and thoughts. In therapy, you process past experiences, and feelings you have avoided, in order to understand yourself better or to break recurring negative relationship patterns.

Internet-based CBT treatments are offered by most regions in Sweden.

Previous research has shown that around 50 percent get better from ICBT. The treatment is effective and has strong research support, however a significant proportion of the patients do not improve enough. There is also a lack of previous research on how IPDT helps young people with depression.

– The study is relevant because many teenagers suffer from depression and need internet-based treatments as they are easily accessible and preferred by many adolescents, says Björn Philips.

– There are treatment options but, especially for young people, research is still limited. Therefore, alternatives are needed for patients who may not respond to ICBT or who wants a treatment with a different focus and explanatory model, Karin Lindqvist continues.

The two different forms of therapy, IPDT and ICBT, have been studied on the same terms. The research group contains experts in both PDT and CBT.

– We have made an effort to balance the treatment groups in terms of, for example, supervision time and contact frequency with patients. The only thing that differed between them was the content of the treatments, says Karin Lindqvist.

The study involved 272 people aged 15–19 years. Half of them was treated with ICBT and the other half with IPDT.

The participants in the study came from all over Sweden and some lived far from the nearest care unit. They were mainly recruited through social media ads and in contact with schools. Initially, it was ensured that the participants had in fact a major depression disorder and no other primary psychiatric diagnoses. They were then randomly chosen to participate over ten weeks in a CBT or PDT treatment online, which mostly consisted of self-help with weekly contact with a therapist. 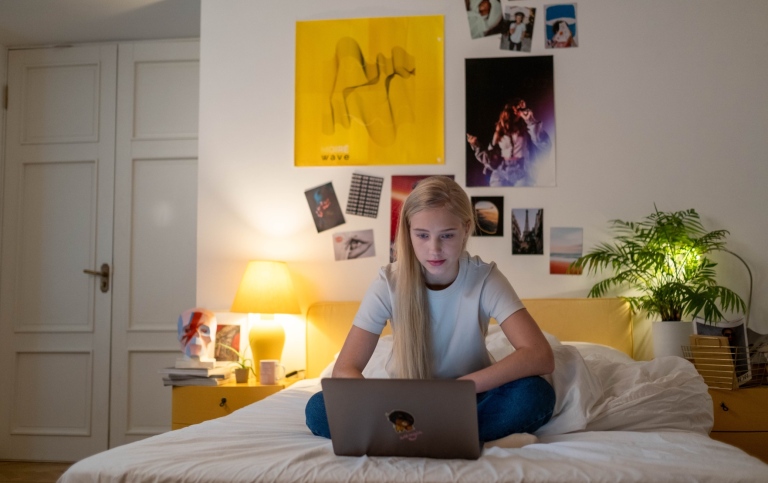 Good results from both therapies

Briefly, the ICBT consisted of different assignments to help the participants understand the mental mechanisms behind the disorder and learn different ways to act in order to feel better. In IPDT, participants were instead encouraged to reflect upon the underlying emotional conflicts that contribute to depression.

During and after the treatment, the effect was examined by following up the teenagers' mood. First and foremost, changes in the level of depression were measured via self-assessment tests. The researchers also followed up the occurrence of anxiety symptoms and the ability to regulate emotions and feel self-compassion.
The study showed that the two treatments had an equal and good effect on young people with depression.

– Our hypothesis was that the effect of IPDT would be fully comparable to that of ICBT and we got the result we expected, which was gratifying because more effective treatments are good for the patients, says Jakob Mechler.

Now the researchers want the study to motivate the health care to start offer both IPDT and ICBT to young people with depression, and that the treatments for teenage depression are offered in an easily accessible way. With more treatments that are supported by research, patients can also choose treatment according to what they think suits them or a treatment recommended by professionals who have made a qualified assessment.

– We hope that continued research, from ourselves and others, will lead to greater knowledge about which person is helped by which treatment. We would like to develop IPDT for young people with other types of mental problems than depression and evaluate the effect of these treatments, says Björn Philips.

Finally, what did the teenagers themselves think about participating in the study?

– Most of them appreciated that they could complete the treatment on their own terms, they did not have to visit a school counselor or a clinic. For many, this is linked to feelings of shame. Instead, they could make their own decision and carry out the treatment when and where it suited them. Many also described that they created a strong bond with their therapist and it was clearly an important relationship, even though everything happened online, says Karin Lindqvist.

– It surprised me how committed many of the teenagers were. It still requires quite an effort to participate in an internet-based treatment. They had to read self-help material, carry out exercises and in our study also chat with their therapist. Although the level of activity varies, we generally saw a great commitment to follow the treatment. It is impressive, especially as many of them had been depressed for a very long time, Jakob Mechler concludes.

Read more about the ERiCA project

Read the article in the Lancet Digital Health