Large accumulations of cyanobacteria, which benefit from ocean warming and are brought to the coast by wind-driven and turbulent currents, are not only inconvenient features for recreational plans along the Baltic coast in the summer. They consume oxygen during decomposition, can be toxic to humans and animals and also affect water quality. In a new interdisciplinary project, researchers will investigate the connection between physical and biological processes that affect algal blooms and develop tools that can predict how they change in a warmer climate. 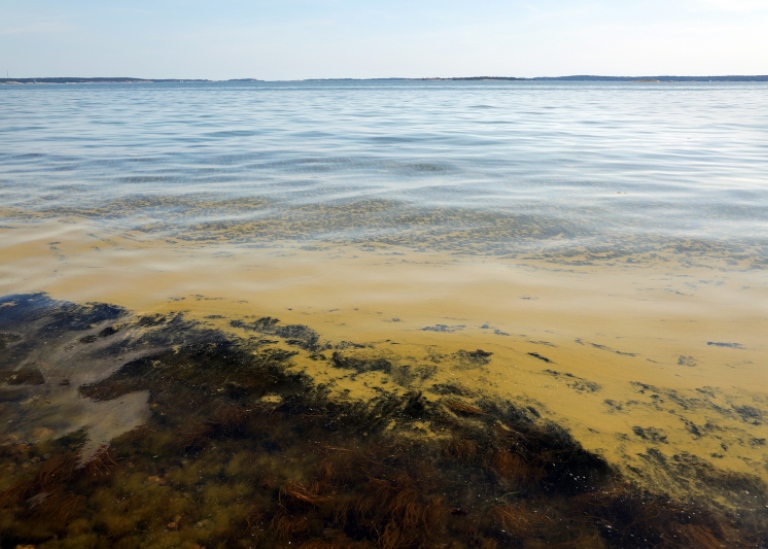 Algal blooms are common in the Baltic Sea. Using new methods, researchers hope to be able to better predict where and when they will occur. Photo: Johan Bjurer/Mostphotos

Strong winds challenge the research expedition when high-tech oceanographic drifters are to be launched into the sea outside the Askö Laboratory on a late summer day. There are six half-meter-large white bioplastic containers, equipped with GPSs, whose main task will be to follow the Baltic currents. In the coming weeks, these gauges will give scientists an idea of how plankton, nutrients or environmental toxins move and are distributed in the Baltic Sea.

– You could say that we pretend that each drifter is a particle, for instance an accumulation of cyanobacteria, and we calculate how fast they spread from each other, says Inga Koszalka, project manager and senior lecturer in Physical Oceanography at the Department of Meteorology, Stockholm University.

Every 15 minutes, the drifters send a signal that lets her know exactly where they are. The movement pattern is being compared with marine models and probability forecasts from, among others, Copernicus Marine Service where the Swedish Meteorological and Hydrological Institute participates. 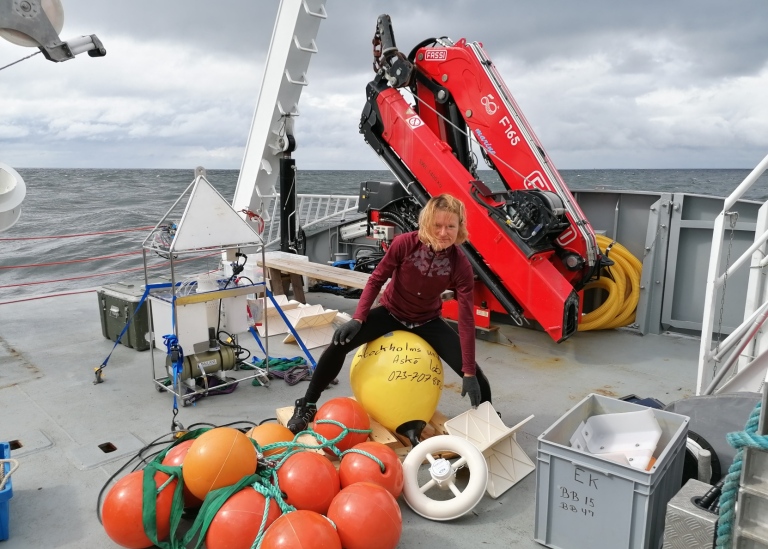 The broader vision for this study is to be able to develop these models to predict how cyanobacterial blooms will expand both in a short time perspective and in a more distant future. Models like these do not exist at the moment.

– Several major monitoring activities, for instance performed by SMHI, track algal blooms today, but there are currently no tools that can predict changes or make targeted forecasts, says Inga Koszalka.

The expectation is to develop a new such tool which, according to Inga Koszalka, would be useful from several perspectives. Apart from a generally increased knowledge, it is also possible to connect maps showing the probability of algal blooms and what consequences or risks they may entail in different coastal areas. Among other things, authorities that run beaches, tourist companies, fishing and not least water treatment, could benefit from this.

– The warm summer of 2018 led to cyanobacterial blooms that caused several beaches around the Baltic Sea to close, and disturbed the operation of brackish water treatment plants in Gotland, which produce drinking water through desalination. Extreme blooming events are associated with increased temperatures and their distribution is largely affected by ocean currents. We want to develop mathematical models for cyanobacteria, to answer whether future climate change equals increased blooming events. Therefore, we simulate how each algal cluster drives with currents and grows from, amongst other things, sun, heat and nutrients. she says.

Similar issues occupy research groups around the world, but the Baltic Sea's unique conditions with different biological processes, salinity and circulation requires rather specific models to understand the changes.

Explaining currents and wind-driven circulation is the oceanographer's own area of expertise, but when the Baltic Sea’s biological processes are added into the context, ecological knowledge is required. Within the interdisciplinary collaboration Baltic Sea Fellows, Inga collaborates with Agnes Karlson, Associate Professor in Marine Ecotoxicology at the Department of Ecology, Environment and Plant Sciences, Stockholm University.

– To get to these mathematical models, we need to consider that cyanobacteria grow, change and decline, and that they affect other parts of the ecosystem, such as fish and mussels. We can see, from other research, that the most common cyanobacteria species is not toxic but can actually be indirectly important for fish growth by enhancing zooplankton growth during the summer, says Agnes Karlson. On the other hand, accumulations of the toxic species are probably not good for fish.

– The Baltic Sea is one of the world's best explored marine areas, but we still need to develop knowledge about basic oceanographic processes, and how they are connected to biogeochemical processes, Inga and Agnes say. Therefore, this collaboration with experts in numerical marine modeling, relevant biogeochemical processes and satellite measurements of blooms, and not least contact with societal actors, is needed. Together, we cover all corners of the complex research issue of algal blooms and their consequences. 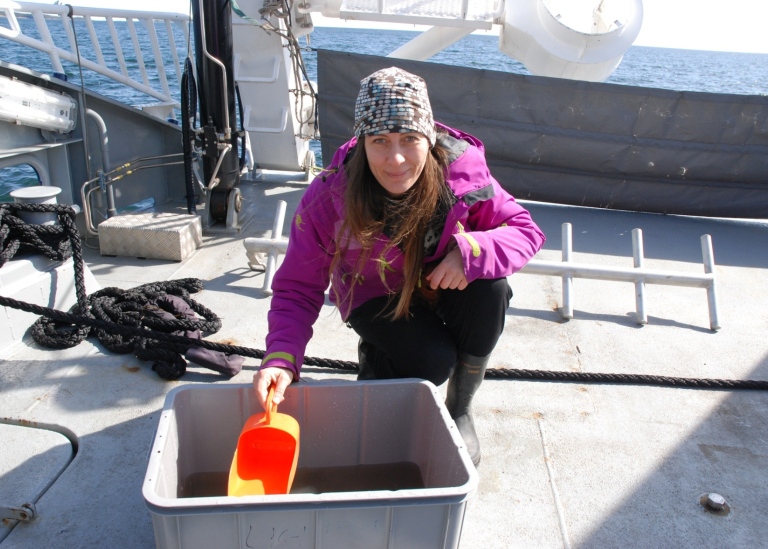 Some weeks have passed since the launch and the researchers have already accessed data that that confirm the existing marine models, and are now ready to take the project to the next step. But the field experiment did not exactly go according to plan.

– A couple of drifters that we launched crashed in Nyköping, due to a strong windrift event that prevailed those days. With my colleagues from MISU, Ole Martin Christensen and Joachim Dillner, and with help from the Askö laboratory we managed to arrange a rescue operation for them, and now they are back in the sea and sampling again.

– It turns out that the time scales for currents are short in this area: it only takes a few days or weeks for the drifters to reach the coast. But this is evident in model simulations as well. My preliminary analyzes indicate that the models are actually better than expected, so I am not at all disappointed that the drifters stranded, Inga Koszalka concludes.

The DriftBloomClim project, is a collaboration between several units at Stockholm University. The purpose is to evaluate how well the existing marine models calculate Baltic currents and drift patterns, and how well they can predict how bouyant particles, such as algae and oil, can spread on the surface.