International symposium at the Department of Culture and Aesthetics, Stockholm University, 11 May 2021.

The symposium will be live-streamed. For Zoom-link, go to: https://conahi.wordpress.com/2021-symposium/ 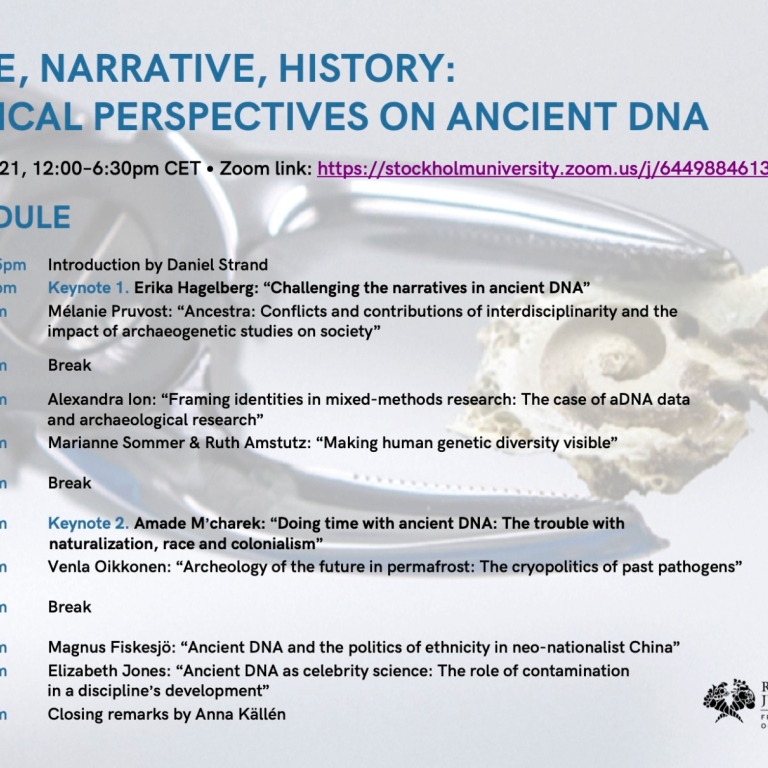 In the past decade, archaeology has become enriched with a new source material: ancient DNA (aDNA). As technological advancements have made large-scale DNA analysis of ancient human remains a relatively inexpensive and simple affair, the number of aDNA samples have grown exponentially. According to leading researchers in archaeogenetics, we are in the midst of a “scientific revolution” which will generate groundbreaking insights into archaeology, history and anthropology.

But if empirical aDNA studies abound, less attention has been paid to the ethical, social and political aspects of archaeogenetics. How does the research field relate to an older tradition of categorizing human beings according to biological differences? In what ways does archaeogenetics activate and reify ideas of identity, ethnicity and nationality? What kinds of cultural or historical narratives are generated through aDNA research, and what kinds of energies might such narratives unleash? How does the entanglement of research laboratories, funding agencies, scientific publications and popular media shape the production of knowledge around aDNA?

In order to explore these questions, we invite you to Code Narrative History: Critical Perspectives on Ancient DNA, an international symposium at Stockholm University, Department of Culture and Aesthetics on 11 May 2021. Hosted by the research project “Code, Narrative, History: Making Sense of Ancient DNA in Contemporary Culture”, the symposium features nine experts on the social and cultural practices and effects of ancient DNA research.

We hope that you would like to join us.

For more information, go to: https://conahi.wordpress.com/2021-symposium/