Third report from Sonja's research in the north.

One of the goals for the SAS Polar expedition in the Arctic Ocean 2021 was to reach the Greenland Shelf - a region where no science expedition has been before. We had to adjust the plan multiple times and discard one of the pre-selected ice stations and add new ones and replace old ones. Finally, we reached station Q - question station, located at 84.3N in the early morning on Saturday 4 September. 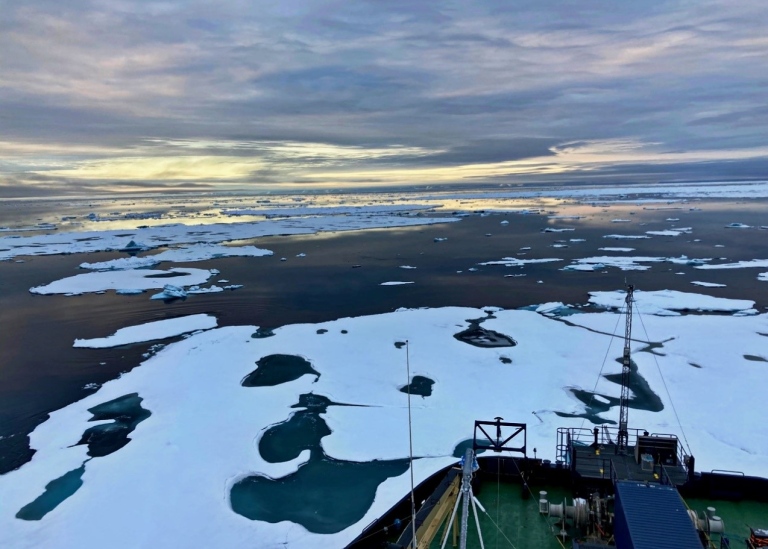 View of the ocean, with open water and sea ice covered with meltponds, with Greenland just barely visible at the horizon. Note the mast at the bow of Oden, where the surface flux instruments are located. Photo: Sonja Murto

The photo is taken early in the morning – the Arctic Ocean filled with ice, melt ponds and open ocean and in the horizon you can see Greenland. I got to enjoy this lovely scenery while launching the early morning 06 UTC weather balloon. It was absolutely amazing to be able to see Greenland. The ice station started with the beam net for catching fish (again, no fish was found). In the afternoon, a thick layer of lower clouds and fog covered Greenland, so that only the mountain peaks were visible, slowly disappearing behind the clouds during the day.

For the ice work, we were lifted on the ice with the cranes basket, that fits max 4 people at once. Only 3 scientists plus a polar bear watch were allowed on the ice simultaneously due to the high risk of polar bears this close to land. Therefore, ice work during the afternoon was dedicated to the two ice coring teams, collecting ice cores and water samples, whereas project-specific groups were allowed to enter the ice after 7 pm. At 9 pm, me and John were the last team to go on the ice to measure gas exchange at a lead located around 80 m from the ship. Despite being out so late, the weather was magical and the ice work was successful.

Simultaneously with the evening ice work, the CTD started and operated through the whole night taking water samples, both at the front and at the back of the ship. The work ending with a box core, which takes an ocean bottom sediment sample, around 9 am on Sunday 5 September before the departure to our next destination: Ice station H.