One of the best days of my life!

During the 57-day long SAS polar expedition 2021 with the Swedish Icebreaker Oden - with a transit from and to Helsingborg, steaming in the Arctic Ocean over the North pole and reaching to the Greenland Shelf where nobody has been before - we stop for CTD stations, ice coring stations and longer 24h-36h ice stations to collect samples and data in order to enlarge our understanding of processes involved in the Arctic ecosystem and climate. Today we have only five days left for research and a then the nine-day transit ahead of us before ending this inspiring and adventurous Arctic expedition. We have had 53 research stations until now, including eight of the planned ten longer ice stations.

After almost a whole day of transit, we finally reached Station G on Monday evening around 5pm. As we aim for all work packages to conduct their science during these longer ice stations, the schedule was full; work to do 24h around the clock. After dinner until late in the night, a chain of CTDs were operated for sampling deep water and zooplankton, while the helicopter went out to deploy fishing equipment and work on the ice was planned between 8pm and 2am! This was the first station where ice work was done that late in the evening, aiming to utilize the night hours for research and thus saving time for the upcoming transit, in case of harder ice conditions. 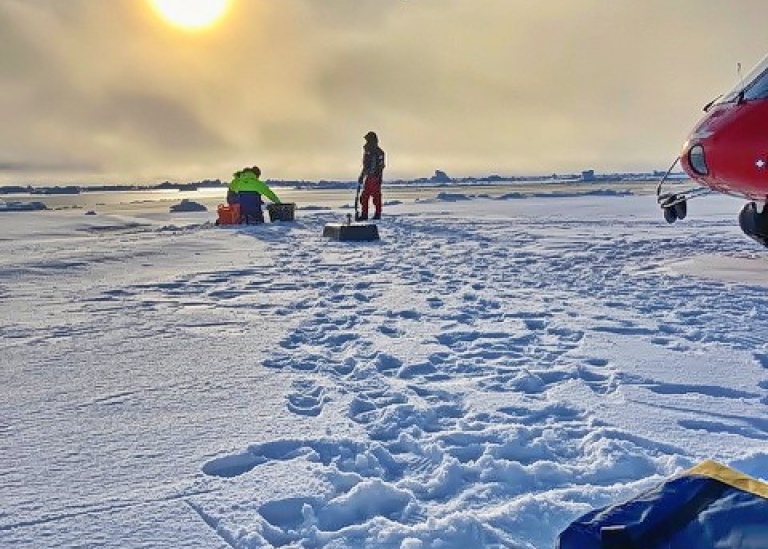 Retrieving fish traps on the ice, while gas-flux chamber measurements proceed on the ice beside the helicopter. Photo: Sonja Murto

Me and John - my team mate on the meteorology working package - went out on the ice around 8pm for three hours to measure gas flux exchanges between the atmosphere and lead (open water) and ice/snow surface and to take water samples from the lead. Apart from us, as usual the two SAS coring teams were out on the ice to collect ice cores as well as other project working groups. As we returned to Oden at 11pm after a successful work on the ice, John went to launch the midnight weather balloon and I went to bed to get some sleep before having to get up at 5am the next day for the early morning weather balloon. CTD casts and measuring and filtering water and ice core samples went on the whole night – what for me was breakfast at 8am, was an evening snack for the others before going to bed.

At 7am on Tuesday morning the Beam fish net started to operate in the back of the ship and went on until 4pm, giving space for others to rest and work on other things during the day. My morning was pretty relaxed and at the 10am “fika” there was left-over birthday cake from yesterday. Before 12am lunch I did some sports and answered emails, and at this point I had no idea how the rest of the day would turn out. In the afternoon project-specific work on the ice was allowed again, so me and John had the opportunity to return to the lead where we were sampling yesterday. However, in the end John went without me as I was given the opportunity to join the helicopter flight to retrieve the fish traps and longlines deployed the day before. The helicopter can take up to 6 people, but during this expedition, usually 2-3 researchers joins the pilot. This afternoon, apart from the experienced scientist and the pilot, me and another happy researcher were going to join this trip for the first time! We were both so excited to fly and to learn about the work on ice with fishing equipment retrievals.

The weather during these two days was also amazing - Monday evening with blue sky, high clouds and sun shining through. Tuesday morning was cloudy and it was snowing, but changed quickly in the afternoon to a thinner cloud cover with the sun shining through, being magically reflected on the lead water surface, with occasionally fog patches passing through and hiding Oden for a while.

During the helicopter flight on the way to the traps, we did some extra rounds in the air for polar bear survey, and on the way back we were flying above the fog and low cloud layers - diagonally and sometimes almost vertically - in order to check the ice situation for the planned departure around dinnertime. One of the most awesome experiences in my life, flying above the clouds, sea ice and Oden - an experience hard to describe in words! 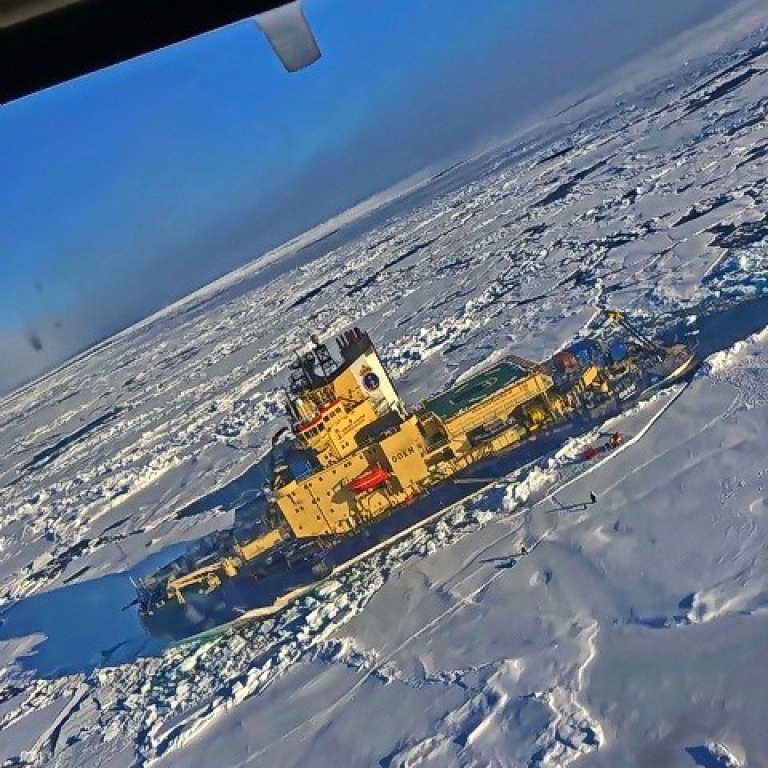 Oden lying in the ice with fog approaching from a distance, from the helicopter in a steep turn coming in to land. Photo: Sonja Murto

Unfortunately no fish was collected, neither with the traps nor the longlines, as was the case during the previous stations as well. However, the work on the ice was fun, although sometimes physically demanding, surrounded by the magic landscape with lovely company - I also had the time to bring one of our own gas flux ice chambers to deploy on this trip while pulling up fish traps!

As we returned to Oden around 5pm, there was time for a quick sauna to warm up before the daily dinner around 6pm. But the day was not over yet - another activity close to my heart occupied this evening at 8pm, as we organized the second lindy hop social dance evening on Oden. This was lovely; a dance evening ending with live guitar music! A movie night in the Oden cinema was also fitted in before going to bed around 1am, as the end of one of the best days of my life.

In general, for all work packages, this station was an effective station work, and definitely a successful and adventurous ice station for our project work, also further enriching our life-experiences - a day I would re-live any minute of, if I got the opportunity!