The newly built drifter balances at the end of the four-metre-long boat hook. In a few seconds it will be launched and tested for the first time. At best, it will provide measurement data and can soon be picked up again. At worst, it disappears, forever.

One of three newly built drifters is launched to be tested for the first time. Equipped with a drift anchor and GPS transmitter, it can provide information on the sea currents in the Baltic Sea. Photo: Michaela Lundell

Students in the Master's course in Physical Oceanography take a break between measurements on board. Photo: Michaela Lundell

The drifters, which will measure ocean currents in the Baltic Sea, are designed and built by associate professor Inga Koszalka and research engineer Joachim Dillner at the Department of Meteorology at Stockholm University. Photo: Michaela Lundell

Ingrid Eronn, meteorologist and student advisor at the Department of Meteorology, discusses today's weather forecast and weather maps with the students, comparing them to what they can observe. Photo: Michaela Lundell

It's November when Master students from the course in Physical Oceanography set sail on the research vessel Electra, together with researchers and PhD students from the Department of Meteorology at Stockholm University (MISU).

Oceanographer and course leader Inga Koszalka and technician Joachim Dillner at MISU have designed and built drifters that, if they work, will give researchers a better idea of how ocean currents move in the Baltic Sea. That knowledge is needed, among other things, to see how ocean currents affect the oxygen content of the water and to be able to make forecasts for algal blooms during the summer.

The drifters are one of several instruments that the Master students will learn to use during the sea excursion. They will also collect data from an instrument on the hull of Electra, called an ADCP (Accoustic Doppler Current Profiler), which measures ocean currents by bouncing sound waves off plankton and other suspended particles in the water. 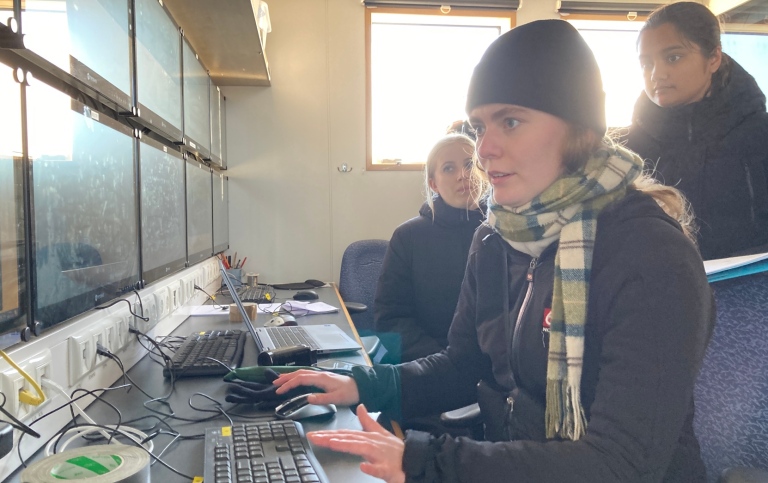 The research vessel Electra is equipped with several instruments for oceanographic measurements, some of which are mounted on the hull. In addition to standard echo sounders, there is an Acoustic Doppler Current Profiler (ADCP), which measures ocean currents by sending sound signals towards plankton and other suspended particles in the water. During the sea excursion, students will get to know all the different instruments. Photo: Michaela Lundell

Inga Koszalka has made both a Plan A and B for the day. November winds permitting, the vessel will head southeast out from the Trosa coast toward deeper parts of the ocean basin, making several different types of measurements along the way.

Course coordinator Inga Koszalka demonstrates how to use a psychrometer, a meteorological instrument for measuring humidity. Photo: Michaela Lundell

Four ongoing research projects will benefit directly from the observational data collected by the students. One is about the upwelling of deeper, colder, nutrient-rich water near the coast, another about how oxygen levels vary in the water – both crucial to marine life. The Swedish Armed Forces also want all the data they can get on the changing speed of sound in the water, to improve their interception and communication with submarines. And the new drifters will be tested for the first time.

– At this depth, there is very little oxygen. We should take a test here. Open the bottles now! says Inga Koszalka to the students who operate the remote-controlled bottle lids on the large so-called CTD instrument that has just been lowered into the water through a side door on the ship. 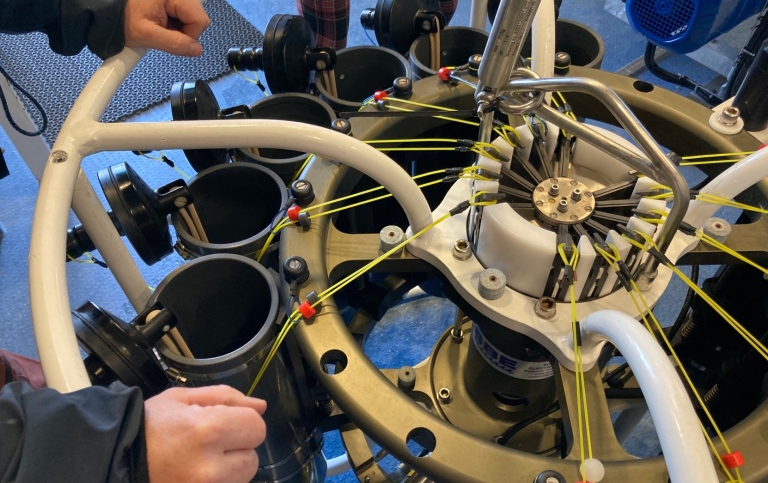 The so-called CTD instrument is equipped with a dozen bottles for sampling seawater at different depths. It has sensors providing real-time information on depth (converted from pressure), temperature, salinity (converted from conductivity) and oxygen content of the water. Photo: Michaela Lundell

She points to the screen, where the temperature, salinity and oxygen content of the water can be seen for different depths, and the stratification that is so crucial for the Baltic Sea becomes clear. 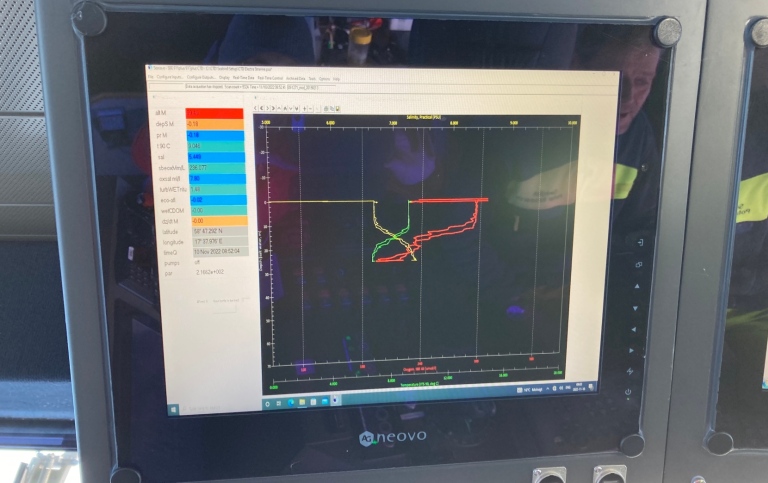 The clines in the water mass are clearly visible from the data sent up by the CTD instrument. At a depth of around 15 metres, the salinity (yellow graph) increases dramatically, while the temperature (green) and oxygen content (red) decrease. Photo: Michaela Lundell

– Can you see that the oxygen level is decreasing much faster than the temperature here? Near the bottom, oxygen is consumed by organisms and in chemical interaction with phosphorus and iron in the bottom sediments, she explains.

A few minutes later, she pencils a calculation exercise for some of the other students.

– The speed of sound is about 1500 metres per second in seawater. But it varies linearly with salinity and cubically with temperature, see?

Out on the deck, the students pause in the November sun between exercises. You can tell they enjoy field work.

– It's nice to see the practical application of the theory, how we measure the ocean and what the instruments are. The circulation of the ocean is vital for the climate system, yet often overlooked, says Katrín Agla Tómasdóttir, a second-year student in the Master's Program in Atmospheric Sciences, Oceanography and Climate Physics. 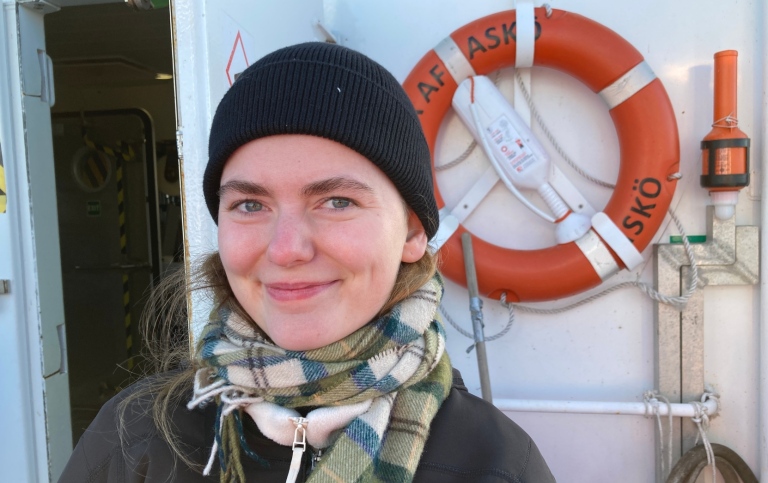 Excitement is running high over the fate of the three newly built drifters launched at the start of the cruise. They look like small white swim rings and are only a few decimetres wide. Thanks to drift anchors, they don't drift with the wind, but just follow the water currents. They are equipped with GPS transmitters and send signals every 15 minutes. Inga Koszalka can follow their trajectories on her computer. In the past, she has experienced drifters crashing on Gotland and one that was probably picked up by a fishing boat – suddenly it headed at high speed towards the Finnish mainland. Ideally, she would like to be able to follow them for at least a few weeks before they run ashore, where she hopefully can go and pick them up.

Course coordinator Inga Koszalka, researcher in Oceanography at the Department of Meteorology and one of Stockholm University's Baltic Sea Fellows, is pleased to report that the drifters have moved in the way she predicted, and the signals are arriving as they should. Photo: Michaela Lundell

Electra's captain Thomas Strömsnäs keeps track of two of the drifters from the navigation bridge, and they are brought in after a short half-hour test. Then they are launched again for a longer journey, starting 9 kilometres south of Landsort.
The third has been drifting for several hours, before it is time to try to bring it in too. It seems impossible to find an object that small out on the open sea. But the GPS signals don't lag and they soon have it in sight.

– Success! exclaims Inga Koszalka, as drifter number three is heaved over the rail. I've been so excited to see how they would work.

She glances at her watch. The November sun is approaching the horizon. Electra turns back towards the coast.

– We have time for a couple of more CTD measurements!

Inga Koszalka is one of Stockholm University's Baltic Sea Fellows.

Read more about her oceanographic research in collaboration with other fellows

Read more about training courses at the Department of Meteorology