Stockholm Business School is one of the largest departments of Stockholm University. The University, which dates back to 1878, is a regional centre for research and education, set in a wonderful cultural and natural environment in the world's first national city park.

The school aims to develop the learning process in such a way that creative thinking and critical reasoning are the guiding principles for the entire study programme. Our courses are based on the latest research. Close contacts with the worlds of business and research, both at a national and international level, allow us to offer a transnational education.

Our vision and mission reflects the emphasis placed by the institution on two essential concerns, research-driven pedagogy and positive societal impact, specifically in the area of sustainable development.

Stockholm Business School is respected for our recognised and relevant research as well as inspirational and research-driven learning experiences. We support sustainable development in society by acting as a constructive discussion partner for business, public and third sector actors and Stockholm Business School should be the number one choice in Scandinavia for students in business administration who want to contribute to a sustainable future.

The SBS mission is outcome-based and focuses on the impact that SBS seeks to have on graduating students. It is intrinsically related to the vision articulated above.

SBS’ mission is to conduct engaging and research-driven education that will develop the student’s ability to meet todays and tomorrows local and global challenges in a responsible manner.

Accreditation - all about the quality

An accreditation process is built on self-evaluation and peer-review. Gaining accreditation is a quality mark testifying that a university, a department/school or educational programme(s) have achieved the level of quality that is defined and sought after by a specific accrediting body.

SBS Executive MBA is today accredited by AMBA (The Associations of MBAs; London, UK) and SBS also strives toward being accredited by AACSB (The Association to Advance Collegiate Schools of Business; Tampa, USA). The two accreditation processes have similar components, but with their own specific characteristics.

Scope: Accredits an institution and the targeted programmes.
Timespan: 2-7 years.
Possibility for renewed status: Every 5:th year.
Status for SBS: The initial self-evaluation report (iSER) was accepted in April 2016. The latest update report of the iSER was accepted in May 2018.

Scope: Accredits specific programmes such as Executive MBAs.
Timespan: 9-18 months.
Possibility for renewed status: Every 3-5 years.
Status for SBS: Accredited in May 2018 (3 years).

Stockholm Business School was founded at the end of the 1950s and initially operated on a small scale as part of the Stockholm School of Economics. It became an independent department of Stockholm University in July 1962. By the end of the 1960s, the School had grown significantly in size and is now one of the largest departments at the University with around 3,500 students and some seventy lecturers/research staff, thirty doctoral students and about thirty administrative staff. Stockholm Business School is part of the Faculty of Social Sciences at Stockholm University.

A modest start in the 50s

SBS had a modest start in the end of the 1950s at the University College of Stockholm (upgraded to Stockholm University in 1960). Teaching was offered through an arrangement with the Stockholm School of Economics. It consisted of a half term course that combined Accounting and Statistics with a basic course in Business Administration.  This was followed by studies in Accounting and Finance, Management Accounting, Administration, and Marketing. Studies for higher levels than two semesters were not possible until 1966 after the appointment of the first professor, Bertil Näslund.

Towards independence as a separate department

”During the eight years that followed the introduction of Business Administration at the Stockholm University College/University the organisation and the full responsibility for teaching and examination fell on the School of Economics professor Paulsson Frenckner, who took on this burden due to his own personal interest. The University is very grateful for all of his efforts in this regard”.

Facilities through the years

In 1962 SBS moved into its first premises at Fredsgatan 10. The building, which had only one lecture hall and around a dozen rooms, was destined for demolition and the School left the 850 square meter venue in June 1964 and instead moved into an apartment with seven rooms on Upplandsgatan 32.  In January the following year the department moved again, this time to facilities on Hagagatan 23 where it remained until the summer of 1970 when space became available in the South buildings of Frescati. Finally, in the year 2000, SBS could move into the Veterinary College’s old but restored buildings in Kräftriket, beautifully located in Brunnsviken.  The department has remained in this location and has developed into one of Northern Europe’s largest teaching departments.

Here is a summary of how many students, educations and employees there are at the department.

Maíra Magalhães Lopes for dissertation The Making of Us: How Affects Shape Collective Bodies Resisting Gentrification.

Teacher of the year 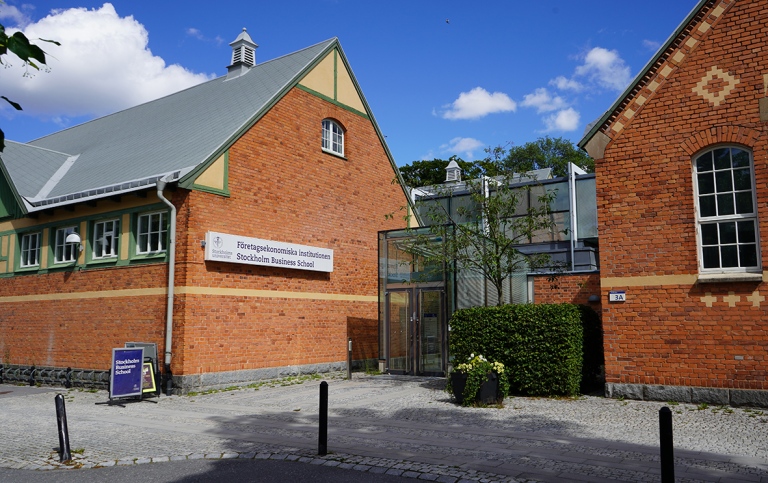